Thursday 27 May 2021 | Written by Melina Etches | Published in Local, National

The Rarotonga water project, Te Mato Vai, dubbed the largest infrastructure project in the history of the nation, was completed yesterday at the official landowners recognition ceremony of the Papua intake in Vaimaanga.

Prime Minister Mark Brown yesterday hailed Te Mato Vai project calling it “historic” and the biggest project the Cook Islands has undertaken since the opening of the Rarotonga airport.

The project aimed at delivering potable water to Rarotonga residents started in 2014.

PM Brown said the first water intakes were built in 1901 “since then, nothing had been done to upgrade the water system”.

He said in 2012, the Government made a commitment to improve the islands water system after “people had been complaining about the water, we had a challenge to change our water system”.

Costing “approximately $90 million”, the development was funded through the first tripartite agreement between the governments of the Cook Islands, New Zealand and the People’s Republic of China.

Then the discussions with landowners started, a long process for 10 different intakes and 10 various groups of landowners, said Brown.

He said the landowners were an important part of this project as they allowed government to build the infrastructure on their land which enabled water to be delivered to everyone on the island.

First the replacement of the ring mains around the island were done.

In 2018, McConnell Dowell began the second stage of the project for the upgrade of 10 existing water intakes across the island working with local companies.

In this file photo from April 2021, a member from the Te Mato Vai Project Management Unit is seen at the newly-built Turangi intake. 21042510

“In every project there is always a challenge, but government shared those challenges,” she said.

“I willingly supported this project because it’s about the livelihoods of our people. I believe that we as landowners can contribute our land for the good of our community, and we should not be standing in the way of progress.

“The project was absolutely worthy and it’s often easily forgotten how water is needed for us to survive.

“We need this clean, clear water for our people,” said Pa Marie Ariki.

For the past six months water from the Papua intake has been flowing into the network as part of the Polyaluminium Chloride (PACl) trial, Boyd said.

“We have looked at the different environmental results – in the excess of 10,000 tests to date around the island, in the streams and the water that come out from the plants.”

Over the next few months, the intakes will be handed over to government and will be managed under To Tatou Vai Authority. 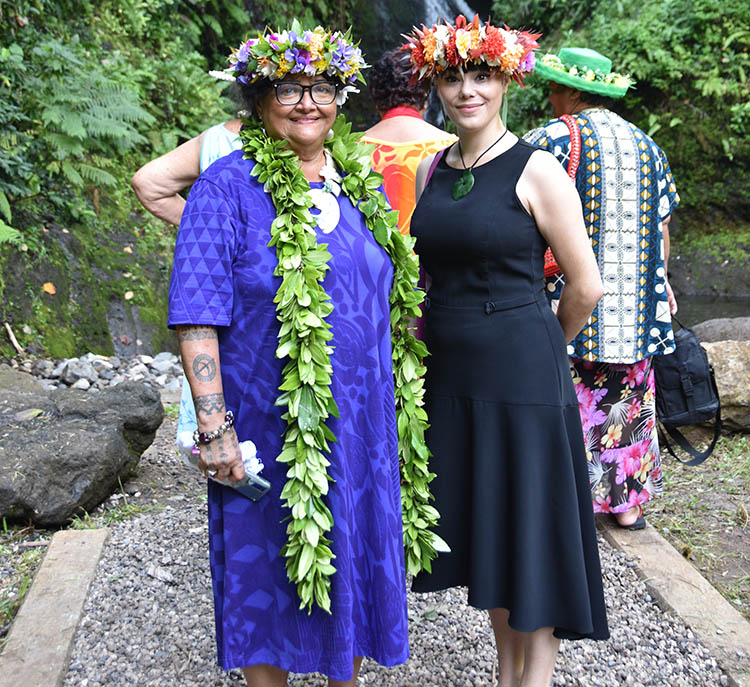 PM Brown said To Tatou Vai will take on the responsibility for managing, operating the infrastructure, “to ensure we have clean water delivered to the households on Rarotonga”.

“A significant amount of money has been invested by our people into these projects so it’s important that we maintain it and keep it up to standard.”

Invited guests gathered at the Ocean Escape Resort property in Turangi before being driven by Sam Crocombe’s Raro Safari Tours to the Papua intake site, then returned for the rest of the formalities.